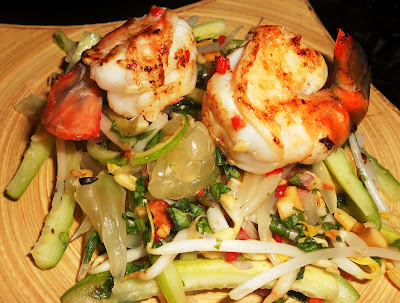 Not only is this is a truly delicious dish but the story behind it is one that fills me with joy every time I think about it. I have a very dear friend who lives in with her husband and two kids. They are lovely and she’s very happy. But no matter how loving your husband and how cute your kids there are those moments when you find yourself deprived of personal space and time, screaming in your head, “I have got to get away from this oaf and these feral brats for five minutes!”. As a newly wed, I think recognising these moments and acting upon them are probably key to making a marriage work…and to generally maintaining an acceptable level of mental health.

So confronted with one of those moments, that’s just what my friend did. I received a text from her saying, “I have taken myself off for lunch on my own. Vietnamese salad with prawns. This is bliss. I just had to tell you”. To which I replied, “Talk me through it”. Which she graciously did – she identified each delectable ingredient for me. Lunch finished, she returned to her family once again full of love, patience and contentment. And I dashed out to buy the ingredients to recreate the dish in .

That night, I ate the exact same meal and it was almost as though we’d eaten it together. It was a great reminder of the power of food, which can allow you to leap across continents and time zones, reunite you with friends and utterly change your mood in an instant.

Posted by Mango Ginger at 12:15 PM No comments: 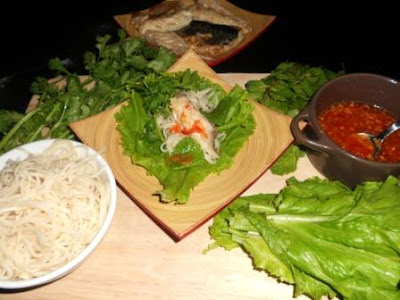 Two weeks ago I got married on a beautiful beach in Railay, in southern (hence the lack of blog activity of late). Behind every happy bride is a dedicated bridesmaid and I was fortunate enough to have four. One of them was Jane, a very dear Thai friend has stoked and indulged my growing obsession with Thai food. Every time I am in Railay, she introduces me to a new dish or snack, each one better than the last.

In the days running up to the wedding, Jane saw me gradually transform from beach bum to Bridezilla as I worried, fussed and organised. She pulled me aside, reminded me I needed to eat and told me that however busy I was, she just had to introduce me to Miang Pla Too. This is  a snack which you eat like a small fajita:  you take a piece of lettuce, fill it with rice noodles, fresh coriander and mint, and fried mackerel, drizzled with a tangy spicy sauce and wrap it into a little  parcel. As I popped the little flavour bomb into my mouth, all the knots in my tummy unwound and my inner foodie who had been woefully neglected over the last week, did a little skip. It was simply delicious.

This recipe is as you would find it in . All I’ve done is tweak the presentation. The fish is usually deep-fried whole and you’d pick a piece off the bone, whereas I have filleted it first and then pan-fried it. It’s up to you whether you want to divide the ingredients up onto individual plates, or let people help themselves from a large plate on the table, which is more Thai style. We ate ours right on a step, no fuss. 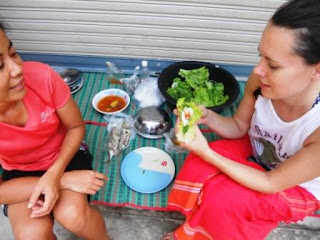 This is a quick, simple, starter bursting with flavour – enjoy!

Posted by Mango Ginger at 11:35 AM No comments: 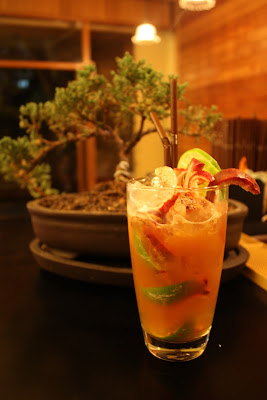 I am getting married tomorrow and I really need a drink! And what the devil am I doing blogging the day before my wedding day when I have 70 guests from all over the world to entertain and a million things to do? Good question -  probably one which my soon-to-be husband would ask if he caught me hiding in this quiet corner of where I have found wi-fi access. For obvious reasons I’ve not had much time to cook of late. So thank god for Buk, the wonderful Mixologist from ’s Seven Spoons restaurant for providing me with this truly fantastic cocktail recipe. As soon as I am done here I’m marching into the nearest bar and demanding (with the full rage of Bridezilla) that they mix one up for me.

And since I’m here, just one more thing. I’m just going to come out and say it. I LOVE Valentine’s Day. I know it’s not cool. We’re supposed to find it contrived and another ploy by the capitalist machine to get us to spend money on things we don’t need. But the way I see it we have a choice – we either turn our nose up at everything from Christmas presents, to Easter eggs and Valentines cards and sit around feeling smug and liberated. Or we enjoy these moments for the opportunity they give us to celebrate important things in life. Tomorrow, when I get hitched on Valentine’s day, my celebrant Kate will remind people that this is not just a day for romantic love but for the love of friends (and I’m pretty in love with mine right now who have flown around the globe to be here with me). So this Valentine’s Day, why not embrace that sentiment. Don’t blow money on a bunch of roses for your partner but go shopping and cook something awesome and serve it with this delicious cocktail and do it for anyone you love, especially your friends.

Email ThisBlogThis!Share to TwitterShare to FacebookShare to Pinterest
Labels: Cocktails 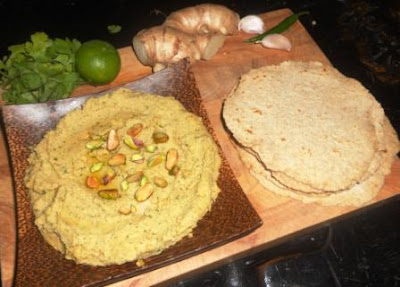 I just spent two weeks working in . The capital city, is one of the most crowded, congested, polluted cities I have ever been to, but once you get out of the city and head to the south coast it’s a different story. I was in which is really beautiful and full of very friendly and welcoming people:

And of course there’s the food. I ate a lot of pretty spectacular curries and also manage to taste some new foods which is always an adventure. Syruppy, milky, gently spiced Bangladeshi sweets with enough sugar to have you bouncing off the walls for the rest the day. But my favorite food I encountered over breakfast which was surprising for me because unless it’s late enough to become brunch, I’m not usually very interested in breakfast. But this flatbread – paratha – was the heavenly.

Paratha is a warm flakey bread, pan-fried and mercifully simple to make. These lads were making and cooking the dough fresh in front of a busy roadside stop where there was a constant stream of people arriving for breakfast: 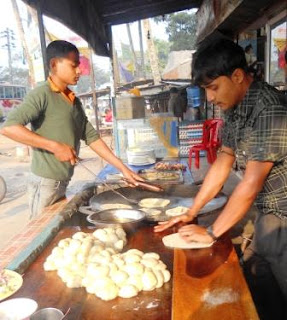 They were super friendly and talked me through the process, which I have converted into this recipe. I was tempted to have a go but their production line was so efficient that I was worried about disrupting their slick machine – and I had no desire to come between the hungry customers and their daily bread!

Parathas are often served with channa masala, a chickpea curry, so the pairing with a Bangladeshi version of hummus feels quite natural. I served this to some friends as they arrived home after a day of sightseeing in . It took no more than three minutes for them to devour every last scrap.

Time: 45 mins - 1 hour (depending on whether you use a food processor or mortar and pestle)
Rating: much easier than you would expect!
Serves: 4-6 as a starter/snack

Cooking ahead? The hummus can be made several hours in advance and kept in the fridge. Though the parathas are best served fresh, you can make them in advance, wrap them in tin foil and reheat in a microwave or oven when you are ready to serve.

Posted by Mango Ginger at 11:45 AM No comments: 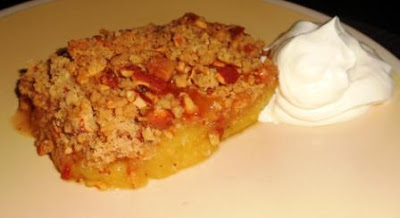 In the first version of this dish there was no crumble – just glazed pineapple with ginger cream. But by the time I’d griddled the fruit in all that butter and sugar and then covered it in a huge dollop of cream, I figured that this had ceased to be a light healthy dessert and I may as well go the whole hog and turn it into a decadent crumble. I’ll start that diet tomorrow…

I have made my feelings on baking clear in previous blogs: I don’t much like it, and it doesn’t much like me. There’s something about the precision that it demands with which I am yet to come to terms. But a crumble is different. It can’t sink, it can’t turn to concrete when it cools, it’s easy to tell if either the crumble or fruit aren’t cooked enough …in other words, it’s pretty hard to screw up.

To me, there is something wonderfully comforting and nostalgic about a crumble as it is the taste of my childhood.  The contrast of hot and cold with the whipped cream is heavenly. Crumbles, at least in the are usually made with apple or rhubarb. The substitution with tropical pineapple and the ginger kick lift the dish and make it bright and cheerful and a great ending to an Asian Fusion meal.

I have a confession to make about the pineapple I used. Here in we are fortunate to have mobile fruit stands on every street corner. You can pick up ready peeled, beautifully cut, chilled fruit for just a few baht: 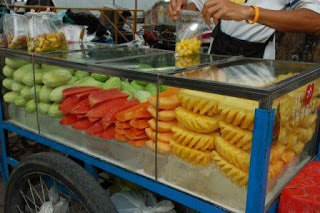 So I did. But I have adjusted the timing in recognition of the fact that some of you will have to wrestle with all the prickles.

Cooking ahead? The crumble can be made several hours in advanced and stored in the fridge, as can the ginger cream. 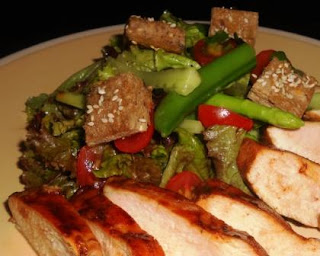 I was going to cook duck tonight. I had it all planned out. The skin was going to be crispy, the sauce sweet, there would be noodles…but it didn’t quite work out like that. Before I went food shopping I went to see the dress-maker who is making some final alterations to my wedding dress -  I am getting married in less than two weeks. As I tried the dress on one of the seamstresses said something to the effect of, “Isn’t that funny, you’ve put on weight. Most brides lose weight before their wedding”.  “Hilarious” I replied, through gritted teeth.

I left defiant. I wanted to behave like a bride who knows that there more important things in life than being thin, even…no, especially on her wedding day. So I marched into the supermarket looking for duck. But they were sold out. The way I saw it, this was either just turning out to be a really bad day, or my dress-maker was an evil genius who had called ahead and arranged this. But my Thai friends who are more superstitious than I would see it as a sign. They would conclude that it is not auspicious for me to gorge myself on pan-fried duck days before my wedding. Maybe they have a point. So I caved and decided to make a chicken salad.

It actually worked out very well. The dressing is delicious - the ginger-citrus combination is really light and refreshing. Between the interesting selection of vegetables and the tasty croutons, I didn’t at all feel that I was eating health food. Don’t worry, my duck will have its day. But in the meantime, a very enjoyable meal which brings me a little closer to doing up the zip!

Time: 40 mins
Rating: Easy. You could do it with your eyes shut.
Serves: 2 (generous portions) 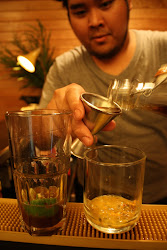